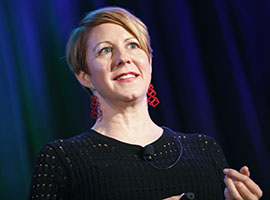 I speak and write about the impact of AI on the world around us: about AI, design, architecture, and ethics.

Since 1998, I’ve given hundreds of talks at conferences, workshops and universities, in academic and professional contexts in North America, Europe, Asia, and South America, including keynotes, plenary, and other featured talks to large audiences.

I spoke at SXSW for 18 years in a row and served on the advisory board for that length of time, and served as the co-chair of the IxDA Interaction Awards from 2016–18.

Interaction19, Seattle: What We Really Mean When We Say Ethics

I spoke about what we’re actually talking about when we’re talking about AI & ethics. I’ll give you a hint: it’s neither AI, nor is it ethics.

AI & architecture: a critical take on history and present

I was jointly invited by the the UC Berkeley School of Architecture and Berkeley Center for New Media to talk about the history of AI, architecture, and ethics. This lecture is part a talk about the research in my book and my new research on ethics and AI.

I gave a keynote talk titled Architects, Designers, and the Invention of AI at Internetdagarna in Stockholm in November 2017. It’s the conference put on by the Internet Foundation in Sweden, the organization that runs the top-level domain (.se) for the country.

In June 2017, I spoke at the Eyeo Festival in my hometown, Minneapolis. The talk is about AI’s architectural history (also one of the main subjects of my book). I titled it “These Important Years” in a hometown shoutout to Hüsker Dü. (Eyeo is the conference where I met my husband five years ago, and since the conference was in my hometown, my parents and nephew were in the audience.)

I spoke at the first O’Reilly Design Conference in January 2016 about the history of artificial intelligence and information architecture, in a talk titled “From AI to IA: How AI & Architecture Created Interactivity.” The architecture of digital systems isn’t just a metaphor. It developed out of a 50-year collaborative relationship between architects and designers, on one side, and technologists in AI, cybernetics, and computer science, on the other. This talk traces that history of interaction, tying it to contemporary lessons aimed at designing for a complex world.

In Chicago in October 2014, I gave a talk as part of MAS Context’s lecture series that neatly encapsulates what my book is about.

Since 2009, I’ve been giving a wild set of talks about pneumatic tubes and old smart city infrastructures, including as a keynote at QCon to 1500 software developers in 2019, at the Smithsonian in 2015, and in hugely popular Ignite talks and on 99% Invisible.

The podcast 99% Invisible kicked off their third season with an episode on pneumatic tubes that featured an interview with me in September 2012.